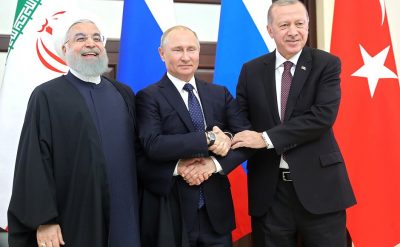 The fifth Syria-focused Astana process summittook place in Turkey’s capital, Ankara on Monday. Since the summit’s inception in 2017, Russian President Vladimir Putin, IranianPresident Hassan Rouhaniand TurkishPresident Recep Tayyip Erdogan have engaged in trilateral discussions regarding resolving the Syrian conflict. The focus of this particular summit was on restoring peace and stability in Syria by forming a committeeto draft a new Syrian constitution, as well as defeating terrorist factions in Idlib.

Immediately prior to the summit in Ankara, President Rouhani blamed Israel and the United States for tensionsin the Middle East. He stated,

“Today, what is taking place in this region and has concerned many countries of the world is the result of erroneous plans and conspiracies of the United States,” he also said, “We have declared time and again that regional issues must be resolved by regional countries and through dialogue.”

“If we want the establishment of real security in this region, a full stop must be put to acts of aggression by the US and provocative interventions by the Zionist regime. Otherwise we will witness the continuation of insecurity.”

President Rouhani also stated that weapons and intelligence are being provided to Saudi Arabia and the United Arab Emirates by the United States and Israel to carry out military activities in Yemen.

Since last year when US President Donald Trump pulled out of the 2015 JCPOA agreement also known as the Iran Nuclear Deal, relations between Washington and Tehran have steadily devolved and worsened.

Over the weekend, Washington blamed an attack on Saudi oil fields on Iran even though Yemen’s Houthis claimed full responsibility. On Monday, in a national security meeting, U.S. military leaders provided President Trump with several possible actions that can be taken against Iran, including a cyber-attack or physical strike on Iranian oil facilities or on the Revolutionary guard assets.

“Tehran is behind nearly 100 attacks on Saudi Arabia while Rouhani and Zarif pretend to engage in diplomacy. Amid all the calls for de-escalation, Iran has now launched an unprecedented attack on the world’s energy supply.  There is no evidence the attacks came from Yemen.”

“We call on all nations to publicly and unequivocally condemn Iran’s attacks. The United States will work with our partners and allies to ensure that energy markets remain well supplied and Iran is held accountable for its aggression.”

In the Syrian war, Iran and Russia are staunch supporters of the Syrian government whereas Turkey and the United States have called for President Bashar’s ouster and supported opposition factions including terrorist groups.

During the Ankara summit, Iranian President Rouhani stressed that constitutional reform and elections will naturally take place once security concerns are dealt with, he also made note of the United States negative role in the conflict.

“We all support the unity of Syria and its territorial integrity, and we are all against the presence of foreign forces in … this country, who came here without any invitation by the lawful government of Syria,” criticizing the United States for their hand in prolonging the war and complicating the peace process.

President Erdogan said prior to the meeting that the three leaders will discuss the latest developments in Syria as well as “ensuring the necessary conditions for the voluntary return of refugees and discussing the joint step to be taken in the period ahead with the aim of achieving a lasting political solution.”

President Erdogan urged for the creation of a “peace corridor” for the return of refugees from Turkey back to Syria and insisted that the US backed Kurdish militias not be allowed to exist there, referring to them as terrorist groups. He also spoke against the separation of Syria.

In line with President Rouhani’s take President Erdogan noted the absence of positive steps taken by the United States in Syria, and that the countries participating in the trilateral talks would proceed in their efforts.

President Putin mentioned that diplomats from all three countries have worked on facilitating an agreement for forming Syria’s constitution with the involvement of both Syrian government and opposition representatives.

President Putin added that establishing a new political process would “contribute to security” not only in Syria but in the entire Middle Eastern region and made note of the importance and major concern of “fighting terrorism” in terrorist held Idlib province. “We agreed to continue our joint efforts to eradicate the terrorist hotbed,” in Idlib, Putin said, “and Russia is ready to support the Syrian army in launching local operations directed at rooting out the terrorist threat, wherever it appears.”

The irony of Turkey (much like the United States), allegedly fighting terrorism while simultaneously supporting terrorist organizations is a blatant contradiction and cannot be under-stated, both nations have neither the legal nor moral right to make decisions or impose their will on the sovereign Syrian nation and its people.

Note to readers: please click the share buttons above or below. Forward this article to your email lists. Crosspost on your blog site, internet forums. etc.

Featured image is from en.kremlin.ru

The original source of this article is InfoBrics
Copyright © Sarah Abed, InfoBrics, 2019