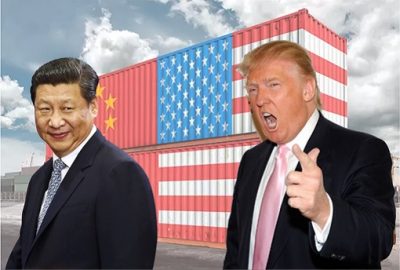 Trade wars assure losers, not winners, Trump waging it on multiple fronts — China his main target, a nation able to give as much as it takes directly and asymmetrically.

His MAGA agenda has nothing to do with reducing the US trade deficit — caused by corporate America shifting manufacturing and other operations to low-wage countries.

It’s all about serving US interests at the expense of other nations, the hallmark of imperial arrogance.

Major US differences with China are all about wanting the country marginalized, weakened, contained and isolated — its industrial, economic, and technological development undermined.

Trump trade/tariffs war with China shows he’s economically ignorant and incompetent. He has access to the best and brightest economic minds in the nation.

Months after announcing his candidacy for president in June 2015, Psychology Todaycalled him “unwilling to listen, overbearing, and shoot(s) off at the mouth without thinking,” adding:

He “doesn’t shy away from confrontation, or really care much about peoples’ feelings.” He lacks “prudence…doesn’t care much for rules and tends to avoid them.”

He lacks diligence and is unpredictable. A previous article asked: Is Trump too Mentally Unstable to Govern?

It discussed a petition signed by 60,000 mental health professionals, judging him “psychologically incapable of competently discharging the duties of President of the United States.”

They requested his removal from office “according to article 4 of the 25th amendment to the Constitution, which states that the president will be replaced if he is ‘unable to discharge the powers and duties of his office.’ ”

It’s in response to the Trump regime’s announced 10% duties on the same dates.

“We don’t need China and, frankly, would be far better off without them,” he roared via Twitter.

There’s virtually nothing the Fed can do to undo trade war damage from his wrongheaded policies toward China and other countries.

Dropping money on Wall Street and into pockets of high-net worth individuals gets none of it to main street where it’s vitally needed.

When people have money they spend it. A virtuous cycle of prosperity follows. America once had sustainably prosperous growth.

Today the nation is in decline, heading for third world status — its privileged class benefitting at the expense of the general welfare, most people struggling to get by.

Trump’s war on China by other means will harm them greatly if it generates a stiff economic downturn ahead.

Beijing responded to his Friday tariffs hike, calling it “barbaric.” Its official broadsheet the People’s Daily warned that state authorities will fight back “until the end.”

“the world is no longer unipolar, and there is less room to do what one wants, as seen in the tug of trade war with China,” adding:

“The authorities in Beijing have reiterated that they would come up with countermeasures against the new round of (US) tariff increases. Nobody emerges a winner from the trade war.”

“(I)t is increasingly evident that we are in the midst of a strategic conflict provoked by the US” — because of US “hubris (and) neo-mercantilism.”

“Based on what I know, China will take further countermeasures in response to US tariffs on $300 billion Chinese goods,” adding:

“Beijing will soon unveil a plan of imposing retaliatory tariffs on certain US products. China has ammunition to fight back. The US side will feel the pain.”

“Without China’s market of 1.4b people, US farm goods will have nowhere to go, farm land being abandoned, farmers going bankrupt,” adding:

“US energy products will also lose an infinite market. Chinese auto market is already bigger than US’…all of this don’t have to happen.”

On Friday, US equity markets reacted to what’s going on by falling sharply — ahead of a three-day G7 meeting in Biarritz, France beginning Saturday.

“It’s impossible for businesses to plan for the future in this type of environment,” adding:

Trump’s “approach clearly isn’t working, and the answer isn’t more taxes on American businesses and consumers. Where does this end?”

“He can provide guidance. He can provide his own thought, but US companies are going to continue to invest and do business with China because it’s too important a market.”

US economic conditions are weakening, likely to show up in reports ahead.

Economist John Williamshighlighted the 501,000 downward revision in US jobs creation, adding that the “final 2019 benchmarking estimate should be even worse.”

“Estimated jobs gain for (the) full year end(ing) March 2019 was reduced by 20%…year-to-year payroll growth revised” down to the weakest level since the “Great Recession.”

Award-winning author Stephen Lendman lives in Chicago. He can be reached at lendmanstephen@sbcglobal.net. He is a Research Associate of the Centre for Research on Globalization (CRG)

His new book as editor and contributor is titled “Flashpoint in Ukraine: US Drive for Hegemony Risks WW III.”

Visit his blog site at sjlendman.blogspot.com.

Featured image is from FinanceTwitter