China’s interest in the Caribbean and Central America 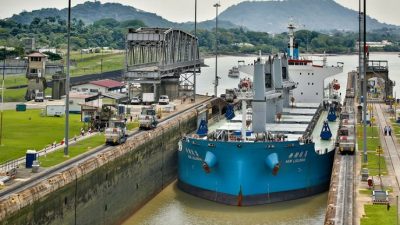 As it becomes clear that the Trump Administration support, so far unsuccessful, for regime change in Venezuela is also very much about targeting the huge financial presence of China with the Maduro government, recent news of a major Chinese oil success in Cuban waters will clearly deepen the geopolitical tensions. And it involves not only Venezuela, Guyana and Brazil.

China’s major state-owned oil company, CNPC, through its subsidiary, Great Wall Drilling, has begun exploring for oil off Cuba’s coast in a joint venture with state-owned oil firm Cuba Petroleum Company (CUPET), according to an April 16 report in the China state news agency, Xinhua. Great Wall has been engaged in oil exploration in Cuba since 2005, but this is the most promising result to date. Advanced drilling technology from CNPC has opened the prospect of major oil off Cuba for the first time.

The news comes as Washington sanctions target Venezuela oil earnings and also its agreements to supply Cuba with low cost oil. While the Maduro government continues to insist it will deliver oil to Cuba despite sanctions, clearly the security of supply is becoming riskier and supply less.

On April 21 US National Security Adviser John Bolton announced that Washington will use a heretofore unused sanction law that allows legal action in US courts to sue foreigners using property seized by the communist regime. While it’s not clear how hard that will hit Cuba, it will clearly chill foreign companies looking to invest in Cuba.

Cuba is well-known to have provided large-scale military assistance as well as thousands of Cuban doctors and medical personnel to support the Maduro presidency in Venezuela. What is less well-known and perhaps an unspoken motive behind the Bolton declaration is the presence of China in both countries.

Details of Chinese loans to the Cuban economy are classified state secret and not disclosed. Clearly though, Beijing has quietly been increasing its presence in the Caribbean island, a country which during the Cold War Fidel Castro era had become a close ally of the Soviets, putting them then at odds with China. Since the collapse of the Soviet Union, despite several attempts by Russian companies such as Norilsk Nickel to gain a presence in Cuba again, financial restraints have hindered any strong new Russian presence.

China appears to have no such problems, and has been investing in a number of key areas in Cuba’s liberalizing economy. Since Cuba trade liberalizations over the past two years, China has sold Yutong buses, Sinotruk trucks, YTO tractors, Geely cars, Haier domestic appliances to Cuba along with 100 railroad locomotives.

Huawei is building internet hotspots on the island and discussions are underway, though with no result to date, for $600 million Chinese investment in a China-Cuban joint venture at the Las Camariocas Cuban nickel processing plant that was left unfinished by the Soviets. Cuba has the world’s third-largest nickel reserves. In 2017 Haier opened a Cuban computer assembly plant with an annual capacity of 120,000 laptops and tablets and a ship container terminal Santiago de Cuba, financed by a $120 million Chinese development loan.

Currently Beijing is Cuba’s largest trading partner and Havana’s largest creditor, with Cuba importing major supplies of Chinese rice, along with thousands of China tourists, a business that brings Cuba an estimated $2 billion annually. Sugar and nickel are the two major Cuban products sent to China amid a trade imbalance in China’s favor.

If China now develops major offshore oil resources in Cuba, their presence will significantly increase and the decline of Venezuelan oil to Cuba as a kind of barter payment for the military and medical and other support, will be eased. Until now Russia’s Rosneft has filled the oil import gap for Cuba.

China is well-established as the major foreign creditor as well to Venezuela with some estimates putting their debt as high as $61 billion. Venezuelan oil is clearly at the heart of the relationship, but there are indications Chinese companies also are looking to exploit untapped gold and coltan resources there. Since the Washington declarations in support of Guaido, China has been unusually outspoken in defense of Maduro, unusual for a state that claims never to involve in local politics.

With details of the extent of Chinese investments in Venezuela not fully clear, China has also made a major presence in neighboring Guyana, since 2018 officially welcoming the small former British colony to join the Belt, Road Initiative, sometimes called China’s New Economic Silk Road. That is indeed far away from an original Beijing infrastructure project, first unveiled by Xi Jinping in Kazakhstan in 2013 that proposed to link all Eurasia from the Indian Ocean to the Atlantic in a dual network of deep-water container ports and high-speed railways. As it unfolds, the China BRI clearly is developing global perspective, and this is clearly beginning to unsettle some in Washington.

In Guyana Chinese companies and Chinese money are presently building a highway link from Manaus in Northern Brazil through Guyana, giving Brazil far more efficient access to the Panama Canal, cutting thousands of miles off the shipping route. Talks are reportedly also underway for China to build a deep-water port in Guyana’s northern coast to link to China’s highway to the Brazil Amazon region bordering Venezuela, with its vast untapped mineral riches. People in Guyana say the road-port will benefit China far more than Guyana. In any case, it would enable efficient ship transport from the Amazon through the Panama Canal to China.

If we add to the quiet but growing Chinese economic presence in Cuba, Venezuela and Guyana, the recent actions of Beijing in the strategic Panama Canal it begins to explain part of Washington’s growing alarm over developments in Venezuela and Cuba.

In 2016 China’s Landbridge Group bought Panama’s Margarita Island Port in the Colón Free Trade Zone, the largest port, on the canal’s Atlantic side, giving the Chinese company intimate access to one of the most important goods distribution centers in the world. They have made major expansion since using by state-owned China Communication Construction Corp., today the world’s largest infrastructure and engineering company.

Already in 1997 China’s Hutchinson Whampoa took control of the American-constructed ports of Balboa and Cristobal in a 50-year contract. Today Hutchison Whampoa is owned by Cheung Kong Holdings of the family of Chinese billionaire Li Ka Shing.

In 2017, Panama delivered a shock to Taiwan, and to Washington, and withdrew its earlier recognition of Taiwan in favor of Beijing. In early April, this year Panama’s President Juan Carlos Varela was in China to discuss formally joining the China BRI. In December, 2018 China’s Xi Jinping paid an official visit to Panama as well. Beijing has put Panama high on its priority list. Chinese goods are the second in volume to those of the USA going through the canal.

In addition to Chinese ownership of vital Panama container ports such as Margarita Island Port, China is proposing to build a $4.1 billion 243-mile high-speed rail line from Panama City to its border with Costa Rica —under the rubric of the Belt and Road.

As these relationships develop, Mexican President Andres Manuel Lopez Obrador has said he is considering joining Belt and Road.

In this strategic setting, it becomes clearer why Washington is beginning to react more strongly in its backyard, Central America, by invoking the 19th Century Monroe Doctrine, a de facto empty shell of rhetoric. What is desperately lacking is a series of positive economic initiatives from Washington to provide the means to help those countries develop critical infrastructure across Central and South America, a stark departure from earlier Gunboat Diplomacy. Were that to begin, the climate in the region could become much more friendly to cooperation with Washington.

F. William Engdahl is strategic risk consultant and lecturer, he holds a degree in politics from Princeton University and is a best-selling author on oil and geopolitics, exclusively for the online magazine “New Eastern Outlook” where this article was originally published. He is a frequent contributor to Global Research.