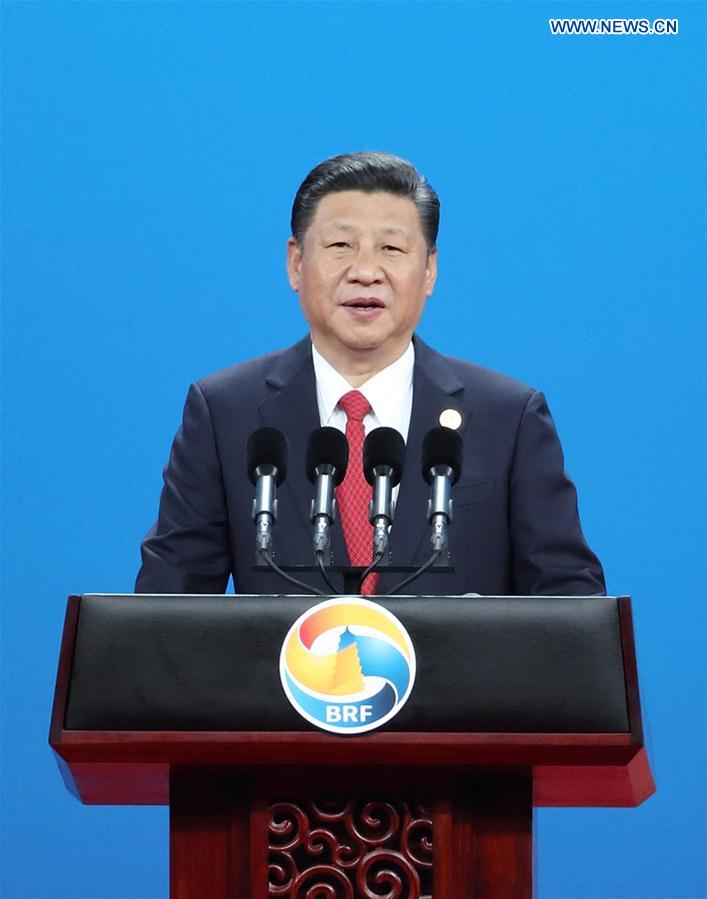 Chinese President Xi Jinping delivers a keynote speech at the opening ceremony of the Belt and Road Forum (BRF) for International Cooperation in Beijing, capital of China, May 14, 2017. (Xinhua/Wang Ye)

BEIJING, May 14 (Xinhua) — Chinese President Xi Jinping vowed Sunday to give a fresh impetus to the Belt and Road Initiative, unveiling specific measures to carry forward the inspiring initiative that he called “the project of the century.”

“A solid first step has been taken in pursuing the Belt and Road Initiative. We should build on the sound momentum generated to steer the initiative toward greater success,” Xi said at the opening ceremony of the Belt and Road Forum for International Cooperation.

Proposed by Xi in 2013, the Belt and Road Initiative, which builds upon the spirit of ancient routes, is a transnational network mainly connecting Asia with Europe and Africa, with the aim of promoting common development among all countries involved.

China’s decision to scale up financial support for the Belt and Road, after billions of U.S. dollars of investment over the past three years, underscored the country’s resolution to push forward the initiative.

Xi announced an additional 100 billion yuan (about 14.5 billion U.S. dollars) for the Silk Road Fund, set up in 2014 to finance the initiative, and new lending schemes worth 380 billion yuan equivalent.

In addition, China will encourage its financial institutions to conduct overseas yuan fund businesses with an estimated amount of about 300 billion yuan.

Xi said China will work with the Asian Infrastructure Investment Bank, the BRICS New Development Bank, the World Bank and other multilateral institutions to support Belt and Road projects.

Speaking of the initiative, Robert Kuhn, a U.S. expert on China, said, “What the Belt and Road does is not foreign aid, that is good but unsustainable. Starting with the Silk Road Fund, the initiative enables the host countries to develop their own economies.”

As the world’s largest developing country that has lifted more than 700 million people out of poverty over the past three decades, China is willing to share its experience and resources with the less developed countries.

China’s economic ascent proves that infrastructure development is an effective way to boost growth, and China is the only country with the will, capability and experience to help, said Zhai Kun of Peking University.

China aims to work with other countries to build the Belt and Road into an open platform of cooperation and a solution for challenges, including a lack of new growth drivers, development imbalance and terrorism.

“What we hope to create is a big family of harmonious co-existence,” Xi said, adding that pursuit of the Belt and Road will not resort to outdated geopolitical maneuvering.

To ease concerns, Xi said China has no intention of interfering in other countries’ internal affairs, exporting its social system and model of development, or imposing its will on others.

Xi said the Belt and Road will be open to all. All countries, from either Asia, Europe, Africa or the Americas, can be partners of the initiative.

So far, the initiative has won support from more than 100 countries and international organizations, of which over 40 have signed cooperation agreements with China.

More than three years since being proposed, the initiative has gone beyond vision and become a reality, delivering tangible benefits to countries along the routes.

From Mongolia to Malaysia, Thailand to Pakistan and Laos to Uzbekistan, many projects, including high-speed railways, bridges, ports, industrial parks, oil pipelines and power grids, are being built.

Since 2013, Chinese businesses have invested more than 60 billion U.S. dollars in countries along the Belt and Road. The investment totaled 14.5 billion dollars in 2016 alone, accounting for 8.5 percent of total overseas investment made by Chinese enterprises.

With coordinated and sustained collaboration among all parties concerned, the forum will mark the start of the Belt and Road 2.0, said Jose Vinals, chairman of Standard Chartered PLC.