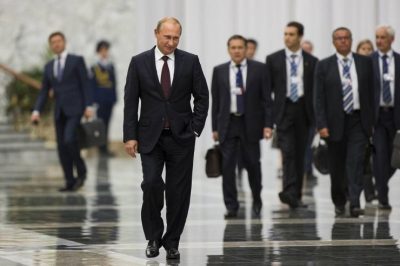 As serious problems emerge with the further development of China’s ultra-ambitious New Economic Silk Road, the formally named Belt, Road Initiative (BRI) the Russian Federation, especially in the wake of Washington’s mis-named trade war, is finding a positive role that could serve to change the entire dynamic of East Asian and Eurasian economic development. Depending on how it proceeds, it could help China to make necessary corrections to its current BRI development model and even benefit the development of the United States in a peaceful way. Here are some factors to consider.

Since Chinese President Xi Jinping formally proposed his BRI project in Kazakhstan in 2013 the project has undergone a huge advance across many countries from Pakistan to Malaysia to Africa. The original rather vague concept has been greatly expanded with creation of numerous state-tied think tanks in China proposing this or that new element. A major problem, however, has become evident in recent months in several BRI partner countries where China seems to have pursued its own project concepts such as in Malaysia, without due consideration for the needs of the partner country, sometimes leaving them with unpayable debts.

The BRI is one of the truly transforming ideas for rebuilding our debt-bloated world economy in a productive way. If that is to happen, it cannot be a mere repeat of the Anglo-American IMF model, “with Chinese characteristics.” Here is where recent initiatives of Russia’s Putin government could provide a major recalibration. The recent ASEAN meeting is instructive in this regard.

Until the foolish John Brennan-Joe Biden-instigated CIA coup d’etat in Ukraine in early 2014–designed to split Russia from the EU, most especially from Germany, France and Italy–there was a dominant orientation in Russian policy circles to look West. With the Obama administration strong-arming of the EU to impose economic (self-destructive) sanctions in their trade with Russia, Russia understandably reviewed her options elsewhere. Initially, that has meant opening new economic and political and even military relations with the other giant Eurasian power, China. The results of the cooperation have been impressive in many areas. That said, the danger always lurks that the asymmetry of the relation will make Russia one day overly-dependent on China, and not a sovereign equal. The recent signs of a Putin Asia Pivot also beyond China could be beneficial to all sides.

Notably, while Russian Prime Minister Medvedev was sent to the simultaneous APEC meeting in Papua New Guinea where President Xi met with Vice President Pence, Putin chose to attend the ASEAN annual meeting in Singapore November 14 of the ASEAN-Russia Summit. ASEAN members include Vietnam, Malaysia, Indonesia, Singapore, Thailand, The Philippines, Cambodia, Laos, Myanmar, Brunei. On the agenda was discussion of how to deepen contacts and trade between Russia’s Eurasian Economic Union (EAEU) and ASEAN as well as creating what they term a Greater Eurasian Partnership also in the context of the Shanghai Cooperation Organization which includes China, India and Pakistan as well as Russia and Central Asian republics.

Russia, owing to its geography and its economy, despite not being the economic or financial colossus China is, is uniquely positioned to be the facilitator of deeper economic and political cooperation across Asia, especially in areas where historical distrust of China is strong. A look at the Eurasian map will show how intimately close Russia is to all these countries. Now Russia is well-situated to leverage that geographical, economic and even military advantage with other Asian partners.