Was Hitler an Illuminati Agent? 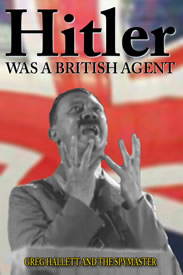 Hallett’s theory explains why Hitler, supposedly the arch enemy of Jewish bankers, acted like he didn’t know the Rothschilds controlled
England and America, when this was common knowledge.
If Hitler had been for real, he would have plucked out the Rothschild’s heart, the City of London before taking on Russia.

Greg Hallett’s book “Hitler Was A British Agent” (2005) depicts war as a ghoulish illusion conjured by occult magicians in order to degrade and eventually enslave humanity in a world government.

Hallett’s claim that Hitler was a “British” agent is based on the testimony of a shadowy network of retired intelligence agents. While he fails to provide documentary proof, Hallett does offer persuasive circumstantial evidence.

For example, Adolph Hitler was in England in 1912-1913, a fact supported by his sister-in-law’s book: “The Memoirs of Bridget Hitler”(1979). Many historians including Hitler biographer John Toland have ignored this startling information. (If Hallett is right, historians like Toland are guilty perpetuating the myth that Hitler was a genuine threat to “Jewish bankers.”)

Hallett says Hitler spent February to November 1912 being brainwashed and trained at the British Military Psych-Ops War School at Tavistock in Devon and in Ireland. “War machines need war and [that means they need] funded, trained and supported double agents to be their patsies, their puppets and their puppet enemies,” Hallett writes (38).

His sister-in-law describes Hitler as completely wasted when he arrived at her Liverpool home baggage-less. “I had an idea he was ill, his color was so bad and his eyes looked so peculiar,” she wrote. “He was always reading, not books, little pamphlets printed in German. I don’t know what was in them nor exactly where they came from.” (pp. 29,35) Hallett says these were Tavistock training manuals.

“Hitler was a British Agent” is useful as an alternative paradigm. (Usually we cannot recognize truth because we have the wrong paradigm, i.e. our “education.”) When Hallett says “British”, he means Illuminati, the Masonic cult of super rich bankers who control an interlocking network of cartels. This cult is based in the City of London but uses England and most nations as sock puppets in a Punch and Judy show called history.

Hallett’s claim would clarify many improbable events in the Second World War. For example, why did Hitler let 335,000 Allied soldiers escape at Dunkirk? This quixotic gesture was explained as a peace overture, but surely England would have been more compliant if its army were in Nazi POW camps.

The Nazi triumph in May 1940 was like a knock-out in the first round. The Illuminati did not intend for the match to end so soon, nor for the Nazis to finally win.

Hallett’s theory also explains why Hitler, supposedly the arch enemy of Jewish bankers, acted like he didn’t know the Rothschilds controlled England (and America) when this was practically common knowledge. (See, Hilaire Belloc, “The Jews” 1922). If Hitler were for real, he wouldn’t have tried to accommodate these countries. England would have been invaded and conquered before Russia was attacked.

Hallett’s hypothesis explains 1)Why Hitler was able to expand into the Rhineland etc. without fear of retaliation. 2) Why the Nazi war machine was financed and built by the Bank of England and a Who’s Who of Anglo American corporations controlled by the Illuminati. 3) Why Hitler never sealed the Mediterranean at Gibraltar; and why the Spanish dictator Franco remained neutral, despite the huge debt he owed the Nazis from the Civil War. 4) Why I.G. Farben headquarters in Frankfurt was never bombed. This became CIA headquarters. 5) Why the Bank of England rewarded Hitler for taking Prague by giving him the Czech gold reserves held in London. 6) Why Japan did not attack Russia despite the fact Hitler entered the war against the US after Pearl Harbor. Thus Stalin was able to fight on one front while Hitler fought on two.

It would explain why Hitler gave his ridiculous racial policies priority over actually winning the war. He could have enlisted millions of Slavs (and even many Jews) in overcoming Communist Russia. Instead, he made them implacable enemies willing to fight to the death.

We could also question why the Nazis never figured out that their communications were compromised; why Hitler didn’t conquer the oil fields of Russia and the Middle East when he had the chance etc.; why the Sixth army wasn’t allowed to withdraw from Stalingrad; but you get the picture. The fix was in.

The biggest improbability of all is that an Austrian tramp, street cleaner and gay prostitute could become the Chancellor of Germany. Hitler joins a long list of obscure blackmail-able figures who have been catapulted to world prominence with the aid of an unseen hand. 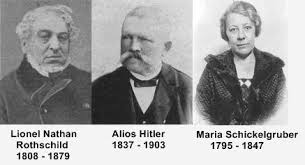 (Salomon Rothschild 1844-1911 not Lionel would be Hitler’s grandfather)

Hallett writes that Hitler’s grandfather was Nathan Meyer Rothschild. Maria Schickelgruber, Hitler’s grandmother, was a maid in the Rothschild’s Vienna mansion when his father, Alois was conceived “in fear” in a satanic ritual rape. The Rothschilds could only marry within their extended family so they had illegitimate children who functioned as anonymous agents.

(Apparently this is a pattern with the Illuminati. Bill Clinton is rumored to be a Rockefeller.)

His grandmother received child support from a Jewish businessman who was probably an intermediary for his grandfather. Bridget Hitler quotes Hitler’s sister Paula: “Since [Adolf] started the race laws we have no grandfather, Adolf and I. Certainly anyone who wished could make a good deal out of that.” (Memoirs, p. 175)

Rothschild’s son, Alois Hitler’s third marriage was to his niece, Klara, who became Hitler’s mother. His father was abusive and his mother over- compensated. Hitler became destitute at age 18 when his mother died, and he lived in a Vienna men’s hostel that was a homosexual haunt.

According to Lothar Machtan’s “The Hidden Hitler” (2001),  Hitler was a homosexual with a long police record for harassing men in both in Munich and Vienna. These records reached both Russia and England but were never used for propaganda, more evidence that the war may have been a charade. (Machtan also says Hitler tried to join the Communist Party after the war but was rejected for demanding too much, evidence he may have been a “gun for hire.”)

MAKING OF A MADMAN

In 1912, Hitler traveled to England for training as an Illuminati agent which took place in German. This “training” ranged from imbibing a sense of his role in Germany’s destiny to learning how to mesmerize audiences.

It also included trauma brainwashing. The “alter’s” consciousness is shattered by witnessing savage atrocities and suffering sexual abuse, all of which is filmed. Then the various fragments of consciousness are programmed and can be accessed with special code words.

Hitler returned to Germany in May 1913 and enlisted in the German army. During World War One, he served as a runner and was captured twice by the English. On both occasions, he was spared execution by an “angel” in British intelligence.

According to Hallett, Hitler enjoyed having women defecate on him. He also had undersized genitals and only one testicle. (Many women whom he courted committed suicide. He murdered the love of his life, his 17-year-old half-niece Geli, when she got pregnant by his chauffeur. Machtan argues that Hitler’s real affections were for the chauffeur.)

(For more on Nazi Homosexuality, see “The Pink Swastika” online.)

History is unfolding according to the Illuminati’s long-term plan. Wars are plotted decades in advance and orchestrated to achieve the destruction of nations and natural elites, depopulation, demoralization, and of course power and profit.

The super rich have organized themselves into a satanic cult to prey on mankind and to establish their permanent hegemony. Put yourself in the central bankers’ shoes. The nations of the world owe you trillions based on money you printed for the cost of paper and ink. The only way to protect this “investment” is to establish a thinly disguised dictatorship, using sophisticated methods of social and mind control. This is the true meaning of the “Terror.” It’s not directed at “Muslim terrorists.” It’s directed at you and me.

According to Hallett, Joseph Stalin was another Illuminati “agent of war” who attended the Tavistock Psyche Ops training school in 1907. Clifford Shack has suggested that Stalin was also an illegitimate son of a Rothschild.

Hallett says Hitler’s death was faked (a double was killed) and Hitler escaped to Barcelona where he lived until 1950, when he died of stomach cancer.

Greg Hallett is a maverick and his rambling book is full of repetition and digressions. I wouldn’t swear by any of Hallett’s claims as yet. But he deserves our thanks for advancing an alternative view of history that while far-fetched is more plausible than what supposedly transpired. We should be able to entertain speculative views without feeling compelled to accept or reject them.

World War Two achieved all of the Illuminati’s goals. Germany and Japan were turned into a wasteland. Sixty million people were slaughtered. The Jewish holocaust motivated Jews to establish the Rothschild’s world government headquarters in Israel. Idealists and natural leaders on both sides were slaughtered. Nations were laden with debt. The United Nations rose like a phoenix from the ashes. Hiroshima cast a pall of terror over the world. The USSR was a superpower and controlled Eastern Europe. The stage was set for the next act…the Cold War.

Given the bleak outlook for humanity, there is a tendency to actually idealize Hitler as an opponent of central banker hegemony. Hallett’s book is an important reminder that like Stalin and Mao, Hitler was an agent; and the Illuminati sponsor “enemies” in order to foment conflict, and keep humanity in its thrall.

and my “Winston Churchill, Illuminati Pawn”

One Response to Hitler, a British agent, trained at Tavistock Institute?